A clickbait can roughly be defined as an article/webpage that purposefully conceals information from the user in its title link in order to generate artificial ‘information gaps’ that arise curiosity and make people click on the article link – hereby generating traffic and in turn revenue for the creator of the clickbait. Clickbait isn’t a new concept. It has been around ever since journalism gained mass popularity. Newspapers have been known to compete with each other for readership, and use curiosity enticing article headings all the way back in the 1800s.

An argument can be made though, and with merit, that the above mentioned definition is narrow in its approach. The line between clickbait and non-clickbait articles has increasingly blurred over the course of the last decade, with the editor of BuzzFeed, Ben Smith, proudly proclaiming in 2014 that BuzzFeed does not use Clickbait, despite the notorious reputation of BuzzFeed on the matter. In all fairness, Smith is right, BuzzFeed does not use title headings that purposefully hide hide key information points from the reader, but whether that implies that BuzzFeed doesn’t use Clickbait or not is a tricky question – with the site frequently relying on questions and creatively portrayed listicles as article headlines.

An alternate definition of clickbait has emerged overtime that acquits BuzzFeed of clickbait charges : articles and pages that don’t deliver on curiosity created in the title, or mislead people into clicking on a half-baked article with the promise of a new piece of information without deliverance. This definition excludes web-pages which use information gaps in title to lure visitors but deliver on their promise and satiate users’ curiosity. This definition is in line with the belief that even the highest order of journalism relies on curiosity to drive the reach of the story.

The Digital Agency Common Places described clickbaits rather frankly in a 2014 article as:

“It’s fast food for the mind, a sugary soft drink for the intellect. It’s a cartoon instead of a serious drama, a sitcom instead of the evening news […]. Why read horrible news about the state of the economy or the latest threat from extremists when you can indulge in glorious trivia about which past president was the most like you? It plays on your weaknesses, tickling the parts of your brain that give you an easy smile, a cheap laugh.”

Questionable definitions notwithstanding, there is widespread consensus on one aspect of clickbait - it works. Today, if an information hole is created for me while surfing online and my curiosity is aroused, I virtually pay no cost to satiate it, a few seconds or minutes of my time is all. Clickbait works because we see the attainment of information that the article promises as a cost-free transaction, there is virtually no risk, even if the article is half-baked – and that’s why clickbait works, in my personal opinion.

In the 1990s, Loewenstein published papers that aimed to decipher curiosity and in doing so, he proposed a new set of ideas - The Information Gap Theory. The work primarily proposes the existence of an inverted ‘U’ curve for curiosity against knowledge about the subject. What this implies is that, we are most curious when we know a little about the subject, but not enough to be certain of the answers. The following extract from my summary of Loewenstein’s The Psychology of Curiosity : A Review and Reinterpretation, 1994 explains the relevance of the Information Gap, as proposed in the review paper, to our work on clickbait:

The information theory of curiosity presents a remarkable explanation in the form of an inverted U-curve of information attainment associated with curiosity. What it means is that we require a base level knowledge regarding a subject to be curious about its caveats, where a saturation point can be attained in the subject after much study and deliberation. This is important for our work on clickbaits as, what might be a clickbait for one person, need not necessarily be a clickbait for another person, owing to the differences between the entry barrier for curiosity. For example, an article like “Top 10 new Trends in Flutter Development that Will Blow Your Mind” will be a clickbait for a person who develops mobile applications or is into software development in general, whereas it won’t rouse any curiosity in a non-developer in a majority of the cases. Hence, in our experimental design, we need to be careful about generalising clickbaits. 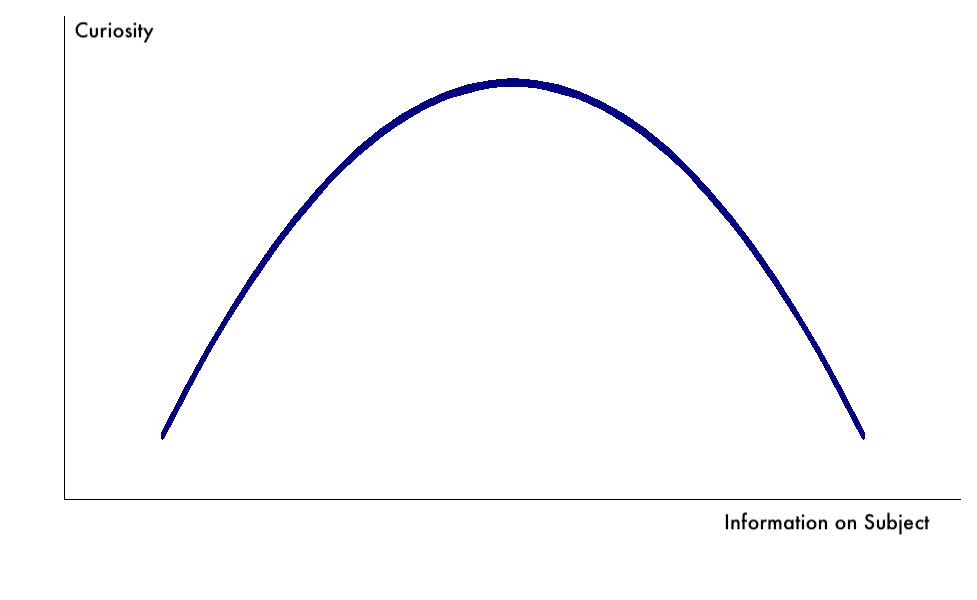 Over the years, certain questions have been raised regarding Loewesnstein’s Information Gap Theory. The theory primarily holds a looming sense of uncertainty, regarding information on a subject that one is already partially aware of, responsible for the tension (an urge to seek more information), that we call curiosity. But this definition does not account for other forms of curiosity, such as curiosity displayed by a tourist in a museum, or that by an entrepreneur while browsing through customer reviews of a new product launch. These issues were addressed by Edward Deci, who proposed that along with Loewenstein’s Information Gap Theory, which focused on dealing with the tension – that is curiosity, “curiosity also reflects our intrinsic motivation to seek out novelty and challenges, to extend and exercise one’s capacities, to explore, and to learn. We use it not just to avoid discomfort but to generate positive experiences.” This is somewhat similar to the diversive curiosity that Loewenstein discussed in his aforementioned 1994 review paper.

The Curiosity Gap publishing model is essentially the implementation of Loewenstein’s Information Gap Theory in the news and content publishing industry. There is a crucial point in this domain that is essential for our work on clickbait: the usage of curiosity gap based article headlines doesn’t necessarily imply that the publication house is relying on clickbait, all forms of journalism rely on reader curiosity to some degree for their sustenance.

This essentially implies that it’s not the headline which makes an online web-page a ‘clickbait’, it’s the content. If the promises and information gaps produced in a heading are fulfilled by the article that follows, then it would be misleading to classify the link as a clickbait. Whereas if the same promises are undelivered, below par content is presented, or the user is redirected to advertisements or unrelated articles, then one can classify the corresponding like as a clickbait with certainty.

Concerning the application of the curiosity gap model on clickbait articles, it’s interesting to note that clickbait is counterproductive to a website’s popularity over the long run, as users eventually stop bothering about the information gap in the headlines when they, over time, start prejudicing against the website’s articles based on their past experiences or notoriety of the publisher.

What does it mean when we say – ‘clickbait works’?

When we say ‘clickbait works’, as I did in the introduction of this page [last week’s submission], we generally imply the success of the curiosity gap publishing model in generating a click. It means that – the curiosity gap publishing model is able to entice a user to click on an article link by creating an information gap in the user’s mind. What’s difficult to gauge here is how effective the tactic actually was, quantitatively. Would the user have clicked on the link even if the title did not generate an information hole? What was the role of curiosity gap model itself in generating the click? This question is much more complicated to answer.

How can you distinguish between situational curiosity and curiosity as a personality trait?

Situational curiosity and curiosity as a personality trait have been given the terminologies – state curiosity and trait curiosity in academic literature. An attempt to differentiate between the two was Naylor’s MCI which based its classification of self-identifying questionnaires, which asked users to rate questions like “I feel absorbed in the things I do”, and how the user felt at “a particular moment” or in a “particular situation”. In my opinion, the classification here is probably a lot hazier than its made out to be in literature. Though more readings need to be undertaken to fully understand and critique on the topic.

Buy me a coffee